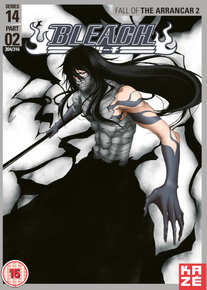 Before we get back to the Fall of the Arrancar arc, we take a slight detour with a separate series of episodes where Ichigo is brought back to life by his sisters Yuzu and Karin - he's called Frankenichigo, but when he gets to the spooky castle, he sees his other friends there dressed up as horror characters.

Uryu is a milk-drinking Quincy/Dracula who's lactose intolerant, Rukia is a pink winged Succubus with a fiendish fork, Momo's a maid, Renji's an unconvincing Pirate, Toshirou's a wolf-man, Rangiku's a buxom witch and Orihime's a pumpkin. Ichigos quest is to protect the crystal at the castle from the monster hunters who want to steal it. This totally unrelated story is comical and serves to answer what the meaning was behind the back cover of one of the manga volumes with them all dressed up as Halloween characters. One other episode is where Lieutenants Kira and Hisagi go for a guys night out. When he's sent on an assignment with Lieutenant Matsumoto, they end up leaving their Captain and Kira, going off to stop at a strange inn, and Hisagi thinks he might be falling in love with her.

These episodes are only a sidestep, a breather from the destruction that is going on in Karakura Town for the rest of the Arrancar arc. This marks the last few discs where the arc has come to an end and many will not expect it so soon. The last disc is filled with humorous filler episodes involving other characters who don't normally get much screen time. As Aizen and Gin have set foot onto the real Karakura Town to wreak havoc on its people, Ichigo's friends Totsuki and Keigo try to outrun the sinister ex-captains. Ichigo has his own trials to go through too - he has to fight Tensa Zangetsu if he is to win against Aizen. As Ichigo continues to fight, Aizen strolls through the town as though he is biding his time before Ichigo gets there. Aizen seems to be teasing Ichigo's friends rather than seeking them out to kill them. We already know that with his power in its current state, he could kill them easily enough, but he doesn't. The appearance of a character we haven't seen in a long while lightens up the feel of the anime, lending it a comical tone even if it is directed at Aizen. From the look of the captains and lieutenants, they are all hoping that Ichigo can get all his power to unleash his final Getsuga Tensho.

For fans of the series, it seems impossible to think that Ichigo could fail, though Tensa Zangetsu is reluctant to let Ichigo get the upper hand. It is also interesting to see how Ichigo has progressed through the series with his own powers and seeing how his Zangetsu has changed as well along with him. He has gone from the old man advising him, to the split Hollow personality (backwards name) to his new incarnation. Aizen's final plan is all set to go as he envisioned, but there is someone else, besides Ichigo who wants to see to it that he doesn't get his way. One character who does want to see Aizen dead is Captain Hitsugaya as he has found out Momo has been hurt and nearly killed twice now by Aizen's hand. We get to discover that he would kill him even if it means him losing his captaincy.

Bleach is known for its well created characters and personalities, their foibles and fun aspects we see here not only in the filler episodes but in the current arc.Like Naruto, this series is one of the best around as the arcs are well worth watching as they build up the tension. Though, there is perhaps far too much filler on the first and last discs in this set.


Verdict: This three disc set marks the end of an amazing arc - one of the best in the series.
Posted by sandrareviewer at 12:52