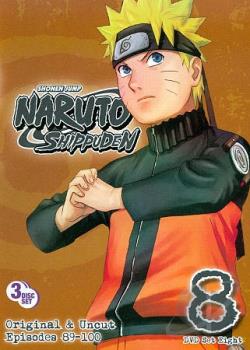 Hidan has been taken down, but Kakuzu is still at large. Naruto and the others of Team 7 have come to the rescue though, and Naruto for one isn't afraid to put up a good enough fight to save his comrades. There is still the threat of the other Akatsuki getting to them and Naruto. When a new mission is set up where Sasuke might be in their grasp along with Lord Orochimaru, Naruto is kept out of the loop and might not appreciate it if he finds out. Their tactics are a bit cruel as Naruto has been waiting for a long time to meet Sasuke once again so he can persuade him to come back home where he believes he belongs - but Sasuke has other ideas. He isn't about to be sidetracked by Naruto or anyone else. He has his own mission to take care of and he feels he has already told Naruto, his supposed best friend that he is no longer a member of Team 7 or will ever be. Naruto never gives up on his friends though, and has annoyed him on many separate occasions - and judging by his style he will continue doing so!

These two discs are more of a catch up and a break off from the characters - Naruto takes some time out with Master Jiraiya at a hot spring in order to take his mind off his recent successful battle with the Akatsuki while Shikamaru does some serious soul searching of his own after the death of Asuma sensei, his master and former shogi partner. Through all of this, Naruto has proved he has got stronger now that he has learned a new technique - the rasen shuriken, but the jutsu is seen as too dangerous as he used it on someone who could be described as one of the best Akatsuki around. Viewers are likely to feel for him when Sakura is concerned about the damage to his body as a result of using it. She has to hide it, but it is hard for her as she has been absent for so long. She has stopped seeing him as such an idiot due to all the heartache he has been through. Lady Hokage has to get him to see reason, and tells him personally he must stop using the rasen shuriken or he might not recover from his injuries. Shikamaru on the other hand has not just lost a shogi partner; he's lost a mentor and a friend, a man he looked up to even though to some he was evasive and not easy to get to know personally. Shikamaru has mourned his loss, and now he has to help others, not least Kurenai sensei who carries Asuma's child in her womb, and will be part of the future of Konoha, and he promised to help her raise the child on Asuma's behalf.

I found this quite heart-warming in the face of the threat from the rest of the Akatsuki. Shikamaru is a brave shinobi and knows how to lead his team, yet he doesn't think he is ready until his mentor and master dies. It is only them when he has to grow up quick, and decide his team are relying on him to make the really big decisions in battle, and we already know how great he is with thinking up strategy plans. So while he is undergoing an emotional change, and Naruto has to revise his use of the rasen shuriken jutsu that has taken a lot of time to perfect, out there viewers are treat to a few episodes that involve Lord Orochimaru and his men, Kabuto and Sasuke. While Kabuto has to go on a short mission to get another of Orochimaru’s henchmen who thought he would never have need. Viewers will enjoy seeing Sasuke in training as it shows he has become more powerful, even than he was before. It is enough to make his master think he is ready to take his body as the vessel he has always desired. They might get the impression he isn’t going to let him take his body so easily. Not when he has his own mission to kill his brother, Itachi.

These two discs are all about the decisions the characters have to make if they want to move on in their lives. Shikamaru has to truly be a leader of his team, and leave uncertainty behind. Naruto has to find another jutsu, one that is not so self-destructive and perfect it ready for future battles with the Akatsuki. Kakashi has to pass the baton onto Naruto as he feels he has surpassed him, though Naruto needs the help of Jiraiya to train him again after such a failure with his new jutsu. It is good to see him reunited with some of Chief Toad’s family and fans of the series will see a few more characters they never expected to see at all.

The general feeling of the series so far is serious, as you get the sense Sasuke is plotting something on the inside, and that Naruto is still not ready enough to face him yet.


Bonus Material: Production Art and Trailers for other anime series in the Manga Entertainment range.

Verdict: Captivating, thrilling and unforgettable once seen - this is why Naruto is the best anime around!
Posted by sandrareviewer at 13:33 No comments: Links to this post