ADVANCE REVIEW: THE HUMILIATIONS OF WELTON BLAKE BY ALEX WHEATLE 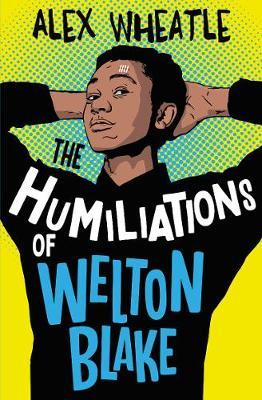 I received this novel as an uncorrected manuscript proof that contained none of the dyslexia friendly features associated with the completed novel that will appear on bookstore shelves or online; the paper used will be an off-white background and have different typesetting. Also, what I could tell was this proof copy doesn't have the cover art that I saw on the press release sheet, so I thought I had got something rare.

Alex Wheatle is the best selling, multi-award-winning author of the Crongton series of novels, Crongton Knights and Straight Outta Crongton. The difference with his new title is it is aimed at a younger audience than Crongton.

The Humiliations of Welton Blake acts as a sneak peek at what it's like to be a teenager, the expectant parents have that they think their son is busy listening to the teacher and sitting up for tests when the reality is they are going through puberty. Welton has developed an interest in girls, and one girl, in particular, Carmella McKenzie he asks out and she said yes.

Most of us have a feeling when they get up one morning whether the day will go well. Welton's day is about to go bad, but Welton ignores the warning signs; his mobile phone won't work, he spots the love of his life kissing another guy and throws up over Karen, though it doesn't end there. Welton's life is about to change after he's asked Carmella out.

Alex's novella is designed for dyslexic readers at interest age 11+, comes with amusing troubles experienced by every teenage boy; bullying, puberty, rejection and boredom with school life. I thought Welton was the perfect example of a teen boy full of life's possibilities, his uncertainty of whether he would charm his dream girl makes for fun reading, but I thought his pop culture references to Star Wars were overdone. On the whole, the story is interesting, the lead character endearing and the ending isn't the one I expected which made for a better read overall.